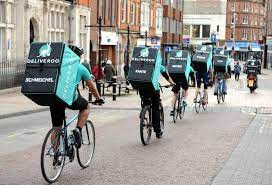 So the billionaires are doing well according to Forbes, whereas the Deliveroo employees not so.  Another company that swirls around in the useless world of the internet has met a sharp barrier of  rejection on its shares, as people begin to think, more ethically, maybe?  Deliveroo delivers food, mainly by bike, according to adverts, so it is probably why you don't see these young people travelling country lanes.

To put it less politely if you can't be arsed to get off the aforesaid, some poor person for a pittance will deliver you a meal of some description.  Well on the back of the successful Uber call, when 70,000 had certain conditions such as holiday pay and a pension, plus a national living wage.  The Deliveroo employees are striking today for similar conditions.

You can make big profits on the backs of the slave labour of the young, or some poor middle-aged man with his only asset a car to drive people around with.

There seems to be three types of people around in the class system, those that can afford the little luxuries of life, the really, really rich class, and the poor, who can't afford to rent or eat properly.

There is the silly arguments in the media about flags behind Conservative members of parliament, plus of course the obligatory picture of the Queen, which is neither here nor there.  Though the question being asked is the party developing right wing fascism undertones may be of interest to some.

But to return to food, in amongst all the wretched television I watch (yes I know) there are adverts for food, food, and more food prepared elsewhere. For elderly people (excellent) food for slimmers (maybe), but when you come in exhausted from work there is a nice little array of spices and sauces to put on the steak (you hopefully have in the fridge) and the rest of the stuff.

It is as if society has taken a downward plunge into nothingness.  Food programmes dominate the screen, food in all shapes and sizes can be delivered to your door according to adverts.  Is anyone in this country not living on the earnings of renting and service industry actually making something.  Anything??

End of rant from a would be socialist.