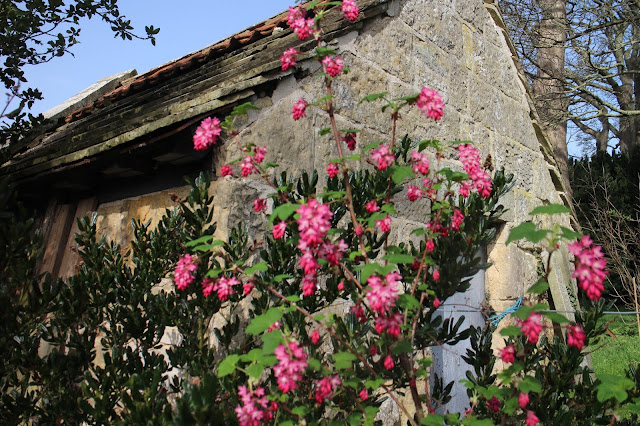 The flowering currant has burst into flower with attendant bees.  It was one of the first plants I became aware of as a child, the sharp pungent smell always invoking the large back garden of childhood.

Yesterday an Easter card through the post jolted me into realisation that life was slowly returning to normal.  The monthly treats on offer, was the garden at Helmsley Castle, The irises at Lastingham and the Arboretum at Castle Howard. A whole group of people that had been lost in the time of the pandemic.

Talked to my daughter on the phone for about an hour as we discussed the future, two grandchildren at Uni in London, one at school in Todmorden and one furloughed in Manchester, and my daughter of course also furloughed in Tod as well, all this to change on the 12th April when people can enjoy more freedom.

The first thing I notice from blogs and elsewhere is that people have become frightened of going out, we have become settled in our homes, finding entertainment where we can, insecurity has set in.

People are winding their lives around the 12th April. When offering some craft books to our local library I was told to wait after the date and suddenly I can just see hordes of people taking to the streets, charity shops piled high with the stuff we have sorted out over this long period.

Plastics are in short supply, I think we should be grateful for that, less in the sea. So also  shipping containers for transporting stuff and just lets hope that there will be stricter rules for shipping live animals by sea it is a disgrace that they die onboard for lack of food and water. Life is beginning to unfold in a different manner.

A friend whilst travelling back from Whitby spied a white tailed sea eagle over the moors, she was so excited about it.  It seems that these great birds are moving further down our coast, there are supposed to be two over the moors. That is one treat the pandemic has brought us, the realisation that the creatures of air and land are important in the general life of us all.