My darling Lucy has gone to the supposedly happy hunting ground in the sky, though she preferred to be in the house and not in the garden. Another stroke on Sunday left her helpless and so on Monday I booked her into the vet.

It was all very peaceful, she snored on the back seat of the car as we went.  You can have your animal euthanised in the car or outside on a trolley at our vets.  So the vet lifted her very gently on to the trolley inserted a catheter, and after the initial tranquilliser, the final act was injected and she slipped away almost immediately.  I have always been at this final act of death for my animals, a solemn and sad experience but relief at the painless end to life.  She will be individually cremated and her ashes brought back to the garden and spread underneath the roses and join her master.

She was to be the first dog  that Paul had had, and he would have stuck with her to the end even though she could go psychotic every so often as memories of her past flooded her mind.  Apart from these occasional episodes she enjoyed her life and especially her home.  Indifferent to walks, she was the mistress of habit.  Always doing the same thing every day which included barking at the window that overlooked the churchyard as I drank my coffee.  Was she telling them to stay put?  Always found to have a soft toy in her mouth when greeting people at the door with a wagging tail.

She was a pretty cocker spaniel, and won hearts, as she won my heart when I first espied her photo at the Dog's Trust, and put in a bid for her.  Her owners were having to get rid of her because they were living in a rented house and had to lock her up in a shed every evening, this is what turned her mind I think, so we would have very rare hours of a behaviour that was troubling as she paced the house and knocked over things.  She came to us with a broken piece of pottery, which was said was her favourite toy and as we drove back from Thirsk, we stopped at Sutton Bank and shared our one packet of sandwiches with her.  That is why we have a large print of this magical place over the fireplace.

She was 14 years old this year and had had a good life but I shall miss her terribly, a good companion in this time of the pandemic. 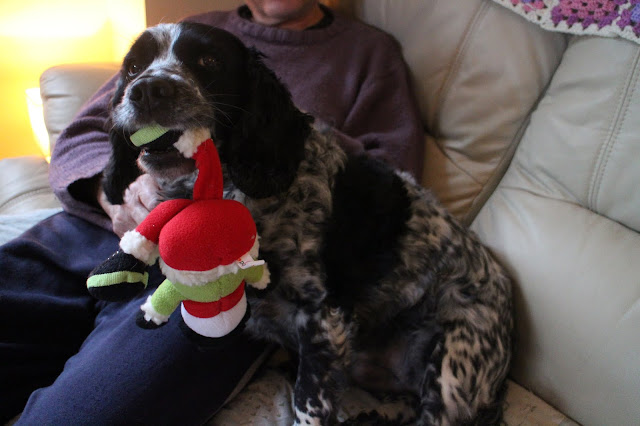 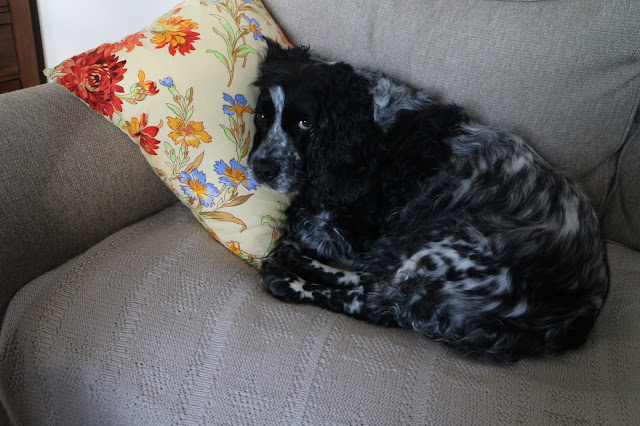