For those in Peril on the Sea

Pat on her blog has asked for heroes/heroines to remember.  And my mind went back to childhood, Florence Nightingale and Grace Darling came to mind in my storybooks.

But Grace's heroic rescuing of survivors in Forfarshire, Scotland brought also to mind another heroic act that happened in 1881 when the ship 'The Visitor' was in trouble in winter.  It happened in Robin Hood's Bay, but the only lifeboat was in Whitby, a distance of 6 miles roughly. So with 200 men clearing the snow ahead of the boat which was pulled by 18 horses, they hauled the lifeboat over the snow, in about two hours and were able to rescue the people on The Visitor on their second attempt.

Henry Freeman was the coxswain at the time, his history can be found at the Whitby Museum. 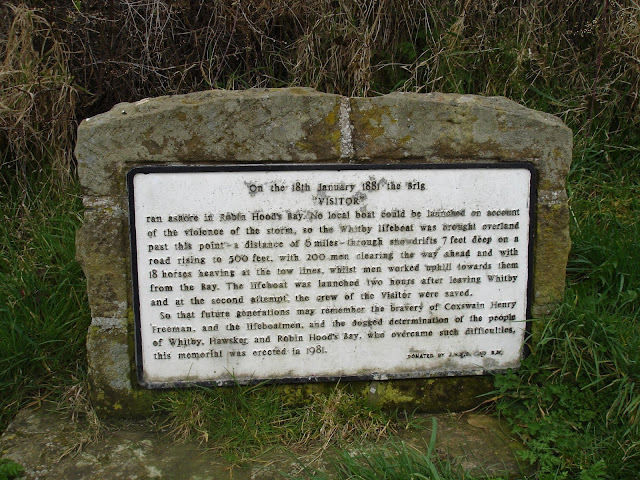 Prince Philip had the hymn sung at his funeral service, a reminder I think that as a country we are surrounded by the sea which can be very rough at times.  Walk the Pembrokeshire coast and look down on drowned boats, and yet people were brave enough to face up to these terrible seas, lose their lives maybe just to rescue fellow human beings.

The house is empty, everything I did Lucy would be there, so there are a lot of tears at the moment but I shall keep busy with such recollections as above.