As Nicholas Shakespeare writes: "These were private and religious farmers whose ancestors had come to Patagonia expressly to get away from the kind of Englishman represented by a young man with a socking great forehead and blue staring eyes who bowled into their village wearing green Bermuda shorts and announced himself in a ringing public-school accent as Bruce Chatwin."

How we do identify people by class, there I was yesterday not knowing a thing about this man, and then I find, his interpretation of truth, whether it be fact or fiction leaves a lot be desired.  For a start he lived in the 20th century, and died of that unfortunate illness called Aids at a young age.  What you read about him is  that his storytelling beat the boundary betwixt fact and fiction.  Excellent writer but prone to tell lies, this was the general view, but a bloody good writer.  Given that their was still a stigma attached to homosexuality during the 20th century, his fibbing that he only had a 'fungal disease' might be excused.  It was his habit though to embellish his travel stories with extra detail.

" was interested in asking big questions about human existence, sharing unusual tales, and making connections between ideas from various sources. His friend and fellow writer Robyn Davidson said, "He posed questions we all want answered and perhaps gave the illusion they were answerable."

Chatwin is a colourful character of that there is no doubt, he encapsulates the modern 20th century, his dashing appearance no doubt helping in the cause, almost a Lawrence of Arabia figure, perhaps that was his hero.  Isn't it funny that in the early part of the 20th century we had begun to discover sex, and it, by its discovery, became the focus of much literary art from that time.

He inspired Rory Stewart, a lesser tory member of parliament, so whenever you see Rory's angular face on television on one of his journeys, remember it was reading Chatwin that set him off.

Well this small amount of research has all been done on my computer, I started off with a thought and found along the way, his book which I am listening to now, 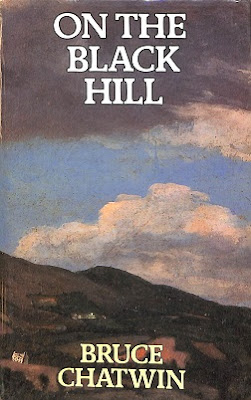 On the Black hill by Bruce Chatwin

It's place of origin has it in the near the village of Craswall, and is the tale of twins and how they grew up in their Welsh valley.  From what I have listened to very evocative for a writer who had never lived in Wales except for a holiday.