Yesterday I was thinking about Daniel Gumb and his elegant carvings on gravestones.  Daniel lived on Bodmin Moor in North Cornwall literally on the moor in a cave with quite a few children.  I had hunted out

information on him, and there was plenty for this mathematician who carved geometry on top of the cave.  This 18th century poor man, made the most of what he had, and lived his life, truly inspirational.

Bodmin Moor is bleak, I met this moor one very rainy day as Paul and I drove down to stay for a few days.  We arrived at the little village of Minions and drove into the small car park with the rain literally pissing down.  I leapt out of the car much to Paul's anguish about the rain and walked to see the famous three circles of the Hurlers with the tor in the distance.  Stone circles have a magic, even in the rain, they stand for thousands of years, drawing you close as you enter their mystery.  We design everything square but once the circle ruled, copying the sun and moon these two objects in the sky that dictated the lives of our prehistoric ancestors.

Daniel must have walked through them as well as he made his way back from the village to his cave home, where no taxes were paid.  An artistic rebel he made his life what he wanted it to be.

We went to the church in Linkinhorne, where you can find some of his carved gravestones.  The experience was highlighted by the great owl that suddenly flew past chased by crows I think, obviously had intentions on the young, it was April and cold! 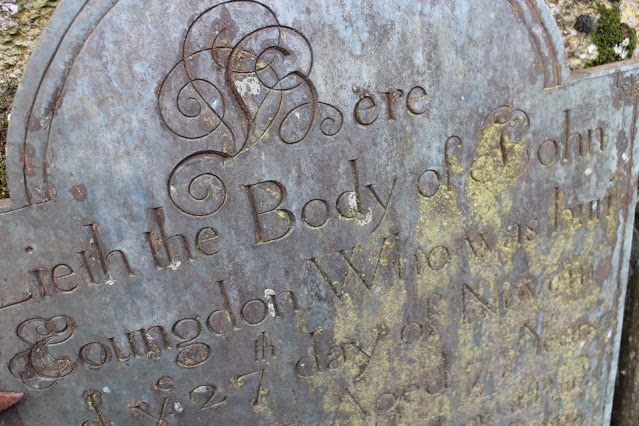 His carving is delicate and yet the Celtic swirls remind you that he must have swallowed reams of knowledge from books that he got from the clergy when he was a boy.  His Euclid equation carved on the top of the great flat stone that topped the cave, here atop his mansion he would sit and contemplate the stars and presumably just think.

I suppose he came to mind because I am listening to Nomadland, different people in a different era, forced by economic circumstance to wander America and work for the likes of Amazon.  Choice has been made to live their lives as seen fit for purpose.

Poverty or wealth afflicts us all, have you ever thought of winning the lottery, but think of all the work entailed if you won.  How to distribute equally, who to give it to.  In the end you only need a roof over your head, warmth and food the rest is just surplus to requirements.