Alexia has died.  It happened this morning, I asked her three times for Radio 4.  She flashed her lights at me but refused to respond.  The others came down, and tried, all to no avail.  Apparently you have to say I love you to her to mend the wretched technological thing but she wasn't listening.

The remote on the television is also lost, I can't view it either (not that I mind) it can be accessed by my daughter's phone in the evening but this break from the box in the corner leaves me sort of elated.

Yesterday my daughter messaged a Jack Munroe Twitter thread.  She was getting agitated (Jack that is) about how everything in the cheapest range of foods in supermarkets had gone up by  hundreds of percentage - if that makes sense.  But such shops as M&S will still be selling their ready meals at the usual price of £10, instead of £34 if their percentage had gone up at the same time.  One law for the affluent middle class, another for the poor.

Contemplating rereading E.P. Thompson - The Making of the English Working Class, or even the Ragged Trouser Philanthropists, but will either give any answers?  I believe that we lurch drunkenly from problem to problem with no clear foresight of the future.

Would an overall basic income that the Green Party have always espoused go somehow towards addressing the problem of poverty.  The chancellor has/is thinking about an one of handout of £500 to help towards crippling energy bills that are forecast from April.

Read on our town chat this morning that they are successful in getting a grant of seventeen and half million pounds to tout up the town.  Do you know what went through my mind immediately?  Who will profit from this windfall the entrepreneurs or the people.  Cynical bitch. But spying the word 'levelling up' in our local Conservative MP  congratulations - the bile did arise;)

Need some pretty photos to liven the blog up. 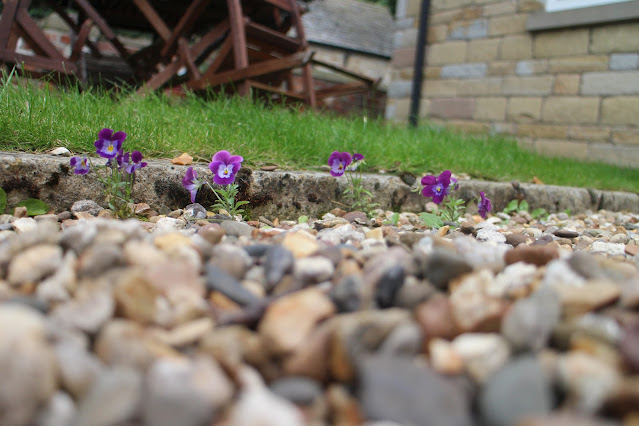 Nothing fancy, just little self-seeded violas that each year pushed their way up through the gravel and flowered.
Posted by thelma at Friday, January 21, 2022