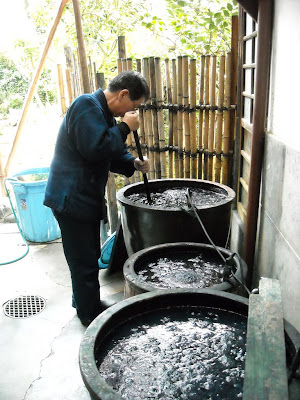 Spinning, dyeing and weaving are things I occasionally do, though indigo dyeing not, its a summer occupation as the wool or silk has to be dipped back and forward so its better done in a garden. Above is a Japanese traditional dyer, his kimonos for sale though are very expensive; the fermentation process is similar to our Woad dyeing something I have done, though again fermentation is required, this time the process if not in lye is in urine for best results, is not particularly pleasant; I used washing soda, though you can use caustic soda very carefully.

Indigo(ai) is an organic pigment in every continent of the earth. Derived from leaves of a variety of different plants, indigo has been a prized dye substance throughout the world for thousands of years. Available only to the aristocracy in the 8th century Ai-zome (indigo dyeing) later became the most popular method of dyeing cotton clothing for common people, and indigo-dyed pants and jackets are still worn in farm villages throughout Japan by crafts men and women.
The indigo plant contains indikan, a water soluble substance which, when acted upon by fermentation forms indigo. Reduced in an alkaline solution from indigo white, it is fixed to the fiber by oxygenation. Indigo is an extremely fast dye, particularly in light and water, with repeated oxygenating, deep shades of blue are possible.
The indigo dye vat is a combination of ground, fermented indigo leaves; lye; lime to control fermentation; and wheat bran to nourish the bacteria needed so the oxygen from the indigo solution will dissolve and be absorbed into fibers. The vat is kept heated to maintain a state of fermentation. A natural fermenting indigo dye vat requires a delicate balance of the above ingredients and condition to produce a deep permanent colour. Hence most indigo dyers use synthetic indigo and chemical additives.
The Utsuki family at Aizenkobo continues to use the natural fermenting pure indigo dyeing techniques only, in the belief that only in this can true ‘eggplant’ indigo blue be obtained. The following are a few of the traditional Japanese weaving and dyeing techniques used to decorate fiber.

Shibori i (tie dyeing)
Is a method of resist dyeing in which the required design is securely tied or stitched onto the fibre before it is dyed. This tie-dyeing technique has been used in Japan since the 8th century(and possibly earlier) for the decoration of silk and cotton fabrics for Kimono, as well as for cushion and quilt covers. Kanoko-shibori, tiny dye resist circles on fine silk, is a speciality of Kyoto, and the Arimatsu-shibori of Nagoya is also famous as a center for the production of fine shibori-dyed fabrics.
Kata-zome (Stencil Dyeing)
Is done by placing a cut stencil over a piece of cloth and applying glutinous rice paste over it. When the past is, the uncovered areas of the cloth are hand-dyed, by dipping the fabric a number of times to achieve the lasting deep eggplant blue. An even more difficult type katazome requires that the fabric be resist-treated on back and front, and then vat dyed, to achieve a reversible design. The stencils themselves are works or art, cut by hand from special paper treated with persimmon juice for extra strength. Katazome has been used in Japan since the 16th century.

Kasur i (Ikat)
Kasur i (literally to blur) is a technique more commonly known in the West as ikat, a Malay-Indonesian word that describes a very old binding process used to colour threads in sections before weaving. This technique produces blurred patterns of alternating colours woven into the fabric, rather than dyed after the cloth has been completed. The pattern is created by binding a section of the warp or weft tightly with thread and vat dyeing the skeins before attaching them to the loom. To create a pattern, careful calculations must be made to determine the exact distance between the bound sections, producing the finished design.

An earlier blog Apparently the difference between chemical dyes of indigo and the organic plant material is highlighted when you photo them, the narrow range of digital colours focuses on the chemical dye and renders the photo purple whereas the real indigo will produce its proper colour in the photo...

Note;`Jill Goodwin in a Dyers Manual says this, she calls the plants of indigo the Indigoferas;The reader will note the similarity of method between dying with fresh indigofera or polygonum leaves and fresh woad leaves with the following difference. Indigofera and polygonum leaves contain an enzyme, liberated at a temperature of 122 f, which removes a glucose which is combined with the indoxl. Fresh indigo and polygonum* leaves are therefore always put into cold soft water and heated slowly up to 120 F with a lid on the saucepan, whereas woad leaves are scalded with nearly boiling water and cooled to 120 F before use. In both cases the leaves are strained and discarded from the solution, which is then used for direct dyeing with whichever reduction agent and solvent the dyer may use.

*The polygonum leaves belong to the Japanese Knotweed, a weed of distinction in this country especially in West Wales.