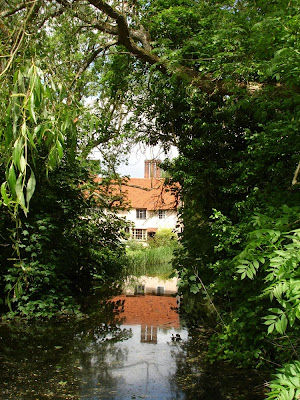 Clearing the mind and sliding in
to that created space,
a web of waters streaming over rocks,
air misty but not raining,
seeing this land from a boat on a lake
or a broad slow river,
coasting by.

Taken from Gary Snyder's Mountains and Rivers without End, it reminds me that the mind should be peaceful as we contemplate the happenings around us. Darkness greets us in the morning and the land turning so quickly towards winter, is becoming grey and monochrome after the sharp colours of autumn.

The birds rise late, the host of sparrows that live in the hedge just across from the house are not so noisy, but the starlings are still here. The young can still be distinguished by their bright colours. I had never come across so many starlings massed together before, and this summer watched them come down in the garden to feed. The young formed a creche, so sometimes there was as many as 20 to be seen, they learnt to bath in the clay pot, perching on the edges, watching each other, they would take courage and jump in splashing their wings clean.
The same comedy was enacted by a young blackbird, a rather nervous youngster who was always getting chased off by his father, at least I think it was father, for he followed him around in a rather forlorn manner. When he got chased off, he would hide under the shed, and though the older bird would not let him bathe with him, the little one would come out when the father had gone and very bravely practise washing in the pot - though he was obviously frightened.

The poem at the top reminds me of all the rivers, brooks and streams I have gazed down into this summer; seeing the great water lily leaves floating just below the surface, pondweed a green haze on dark waters. The rushes and tall spikes of irises, intermingling with meadowsweet and mallows. The fish swimming lazily in the mill pond, bright gleams of sun on water and the small dabchicks 'walking on water' 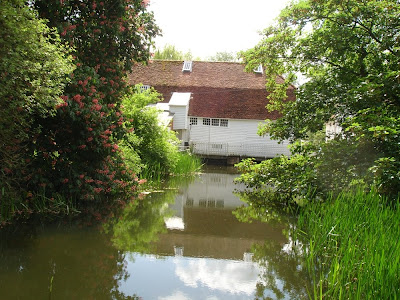 Coggeshall Abbey, the mill is situated behind the large farmhouse here....