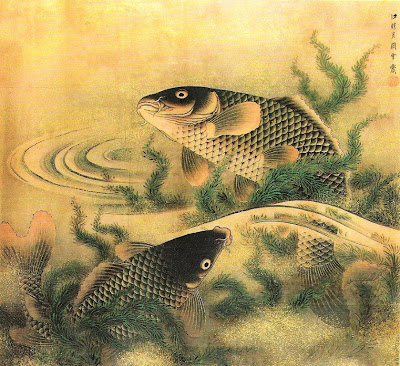 The Salmon of Wisdom, is an Irish celtic tale, the salmon in the tale had swallowed nine acorns from the nine hazel trees that surrounded the Well of Wisdom. In doing so he became a fabled legend of wisdom. A poet spent seven years trying to catch this fish, and one day he did and passed it over to his apprentice Finn to cook but under no circumstances to eat the fish. Finn did this, but accidently stuck his thumb on the fish after it was cooked, and then sucked his thumb. Well as luck would have it this was the precise morsel that contained that pearl of wisdom, so Finn was now endowed with great wisdom and went on to perform heroic deeds as in all good celtic tales; there is a Welsh version of this as well.
What struck me about the story though was that it was very similar to the Chinese tale, also adapted by the Japanese, of carp struggling up to jump waterfalls, a characteristic very familar with salmon as they go back to their home river to spawn in the shallow waters.
The Chinese carp are seen as symbols of martial attributes due to its armour like scales, and therefore paintings reflect the myth of the carps swimming upstream and jumping up waterfalls to change into a dragon if they achieve their goal. So a painting of this is given and hung up in offices as a sign of achievement to which everyone can aspire to!
So the tale goes that if a carp who succeeded in swimming upstream in the Yellow River to leap over a place called the Dragon Gate, would be transformed instantly into a mighty dragon...

The picture above which hangs on a wall, was originally a single screen surrounded by a frame and free-standing. Such screens were set in direct alignment with the entrance to a temple. So that as you went into the temple it faced you. This was to keep the bad spirits out, because apparently they only travelled in a straight line, not like our spirits at the cross-roads who could presumably take whatever road they felt like, though of course the answer that by burying the wicked at a cross road they would be confused as to which way to go.