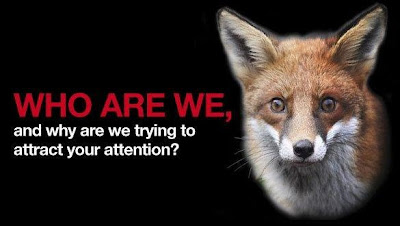 Poster from 'Save Me' Brian May's campaign

There has been a lot in the news about animal rights this week, mostly to do with our ability to train cameras on wild animals and view their every movement, should we not respect their rights to privacy, instead of watching them on TV. Not sure where I stand on this, firstly I agree most wholeheartedly that animals should commandeer the same respect as humans, we should not cause unnecessary suffering. I have joined campaigns in the past to stop cruelty, beagles forced to smoke cigarettes to see what it did to human lungs, rabbits who had shampoo squirted in their eyes (no explanation required there). Factory farmed chickens (it still happens) and badger baiting, in which we would patrol our local hills round Bath keeping an eye on the badger setts; that one got a law passed against baiting. But of course there is to be a cull of badgers in Wales due to the argument that they infect cattle with bovine TB.
And to a degree we are a little more kinder to the rearing of chickens, though it should be remembered that our milk cows have a very short life due to the specialised breeding of animals that gives them larger udders.
So the poster above is another campaign against cruelty, one I featured on my Facebook site last week, this time against the hunting of foxes, which though banned under present law, still sort of goes on but without killing the fox with dogs...hmmm. Stag-hunting by the way is also very cruel, the chasing of stags to exhaustion on Exmoor makes one despair.
Brian May of Queen resides in Bath I believe, I notice he is campaigning for a labour canditate, Dan Norris in Keynsham, who just might get the seat, given that he was a popular MP in Bristol. Of course Keynsham is the home of Cadbury's who have sold their chocolate factory to the American giant Kraft, with the consequence now of the closure of the factory and loss of 500 jobs.
As we once more go through the travesty of another election on the two, or maybe three party selection, it would be good for just once to be able to vote on issues, and even, dare I raise it, proportional representation. Being in the 'green movement' for so long, I have despaired that we should ever do anything for planet Earth, except of course when we are forced to take notice of the destruction we wreak on this earth, a fate that America is having to face as the oil slick gets nearer to its coast in Mexico.

So if I have to make some choice on issues next week, some of these issues are contained in the following leaflet....