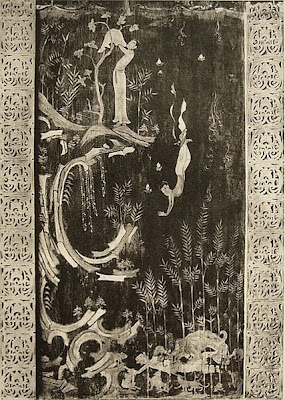 This is the 7th century depiction of the story of the prince offering himself to the lioness. It is a 'three picture' narrative. The picture is depicted on the side of a portable altar in the Horyu Ji temple

Recently in some news was the story of two young eagles poisoned in Ireland, and the fact that the eagle might become extinct in Ireland, there was also the story of an egg collector who gathered rare eggs for his collection and too sell. The eagles could have been poisoned by a gamekeeper, probably protecting game birds for shooting, or a farmer protecting his young lambs. Both acts are unforgivable, the killing of large predatory birds and the robbing of nests but they point to a 'relationship' with the natural world wholely in favour of our human need to dominate and control the 'wild' around us...

Here is a different tale...

"While out riding, a prince and his brothers come upon a starving tigress and her cubs. The brothers return home to bring food, but the prince remains behind. Fearing his brothers will not return in time, he decides to sacrifice his own body to feed the animals. The tigress and her cubs are weakened from starvation, so the prince must jump off a cliff, breaking his body into smaller pieces. When the brothers return, they find only the prince’s bones. They collect the bones and build a pagoda for the relics."

A morality tale, a turning round of the accepted view, could it be that other species have an equality, a right to 'survive', as tales of the greater primates becoming extinct flash across our screen, we give it a moment of thought but the deeper ethical position somewhat eludes us, we are not prepared to accept 'brotherhood' with these or any other creature, we are after all, the clever species, the one that 'survived and evolved' under Darwinian rules.

Reading Mary Midgeley, she sees our response to the singular nature of such causes, adoption of specific campaigns; for instance stopping the rain forest from being chopped down, the hunting of foxes or the killing of whales to name but three. What we do not do is look at the much larger picture of the natural world as a whole, and perhaps more importantly though we may feel guilt we do not address that which lies behind the destruction that humans do to other species.

Changing the myths by which we live, (and yes we do live in a scientifically rational world, but also a very reductionist world) the ongoing process of economic growth has a precedence over everything else. What she advocates is that we may have to change our perception of the world, change our direction and in so doing change the future. And that of course is the most difficult thing to do.............

p.s. this of course leads on to 'deep ecology', and the writing of Arne Naess and others, a philosophy underpinning a lot of green radical thinking....


The well-being and flourishing of human and nonhuman life on Earth have value in themselves (synonyms: intrinsic value, inherent value). These values are independent of the usefulness of the nonhuman world for human purposes.
Richness and diversity of life forms contribute to the realization of these values and are also values in themselves.
Humans have no right to reduce this richness and diversity except to satisfy vital human needs.
The flourishing of human life and cultures is compatible with a substantial decrease of the human population. The flourishing of nonhuman life requires such a decrease.
Present human interference with the nonhuman world is excessive, and the situation is rapidly worsening.
Policies must therefore be changed. These policies affect basic economic, technological, and ideological structures. The resulting state of affairs will be deeply different from the present.
The ideological change is mainly that of appreciating life quality (dwelling in situations of inherent value) rather than adhering to an increasingly higher standard of living. There will be a profound awareness of the difference between big and great.
Those who subscribe to the foregoing points have an obligation directly or indirectly to try to implement the necessary changes.


These are fine words but probably impossible to achieve, I do not necessarily criticise Naess but having read all these authors over the years I think that there is a certain unrealistic aim here, though beautifully put. Naess lived in Norway, he loved the mountains and solitary places, most of humanity live in a very different scenario. But all these philosophies have come and gone, his was the inspiration for movements like 'Earth First' an American group more radical than Greenpeace.
Today I find in my email box George Monbiot talking about another movement, this time 'The Dark Mountain project' proposing that all of the above, the individual campaigns and trying to save the world are a waste of time! What we should be doing is knuckling down and learning to survive whatever happens in the future - not terribly new thinking, its part of the myth that 'greens' live by, but perhaps its a sensible way forward. And do I note in the writing that Paul Kingsnorth has also been reading Mary Midgeley, and putting forward the similar idea of creating a new myth by which we live, and thereby living it?