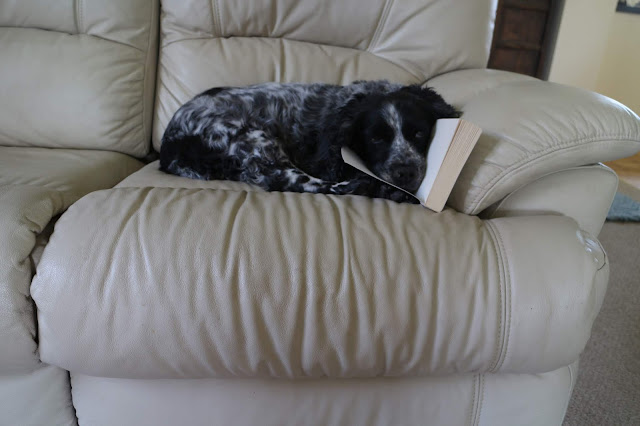 Disruptive cocker spaniel called Lucy.  Is she trying to read the book?  Normally she tears up books, cross that I am upstairs on the computer so she punishes me, either tearing up books or tangling my knitting wool!  Yesterday it was  'Middlemarch's cover.  Which they have been reading on the radio, and had come to an end yesterday, with Maggie and Tom drowning together. 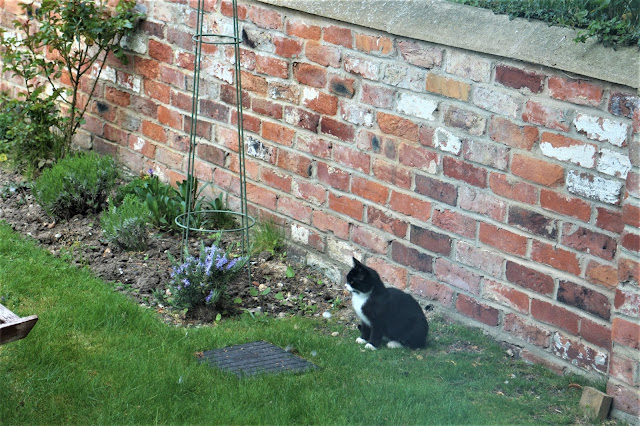 Green Eyes is so cute, she is settling herself into the garden, wandering round after the bantams, I should really get in touch with the Cat Protection charity to get something to catch her in, so that she can go to the vets, but then are the vets working?

Several cockerels and a couple of hens in the copse, they belong to Nelson and are ranging far and wide for food, praying though they don't make it into my garden. What is he going to do with all those cockerels? eat them?........

As everyone knows we have a 5-0-clock  news showdown on the state of the virus information each day.  Three people stand at their podiums and analysis state of play.  One has been our chief medical officer Chris Witty, gravely serious but an expert, so it was nice to read something good about him, and I quote someone else's response on F/B.  It was taken from a site called 'Overheard in Waitrose', (a lovely ironic jab at a posh supermarket). The government man in the middle, whoever he may be, Johnson or Hancock, must bow to the superior knowledge of the scientific people who stand alongside them.
There is a growing mood by the way against the fact that a 99 year old man who walked back and forth in a very brave and gallant manner and raised millions of pound for charitable purposes for the NHS.  That in fact it is the role of our government to fund the NHS properly through the taxes we pay and not charity. Don't let me embark on the billion pounds HS2 will cost....

"So I thought it'd be nice to balance things out with a few kinder words and some facts about our extraordinary Chief Medical Officer, Chris Whitty.
He is a Physician and Epidemiologist who has dedicated his life to medical practice, research and teaching and he is considered to be one of the leading world experts on infectious diseases.
He only took on the chief CMO role in October 2019, and until the coronavirus threat emerged, he had never done broadcast interviews or held press briefings or conferences.
He has worked in various countries throughout Europe, Asia and Africa and played a leading role in the effort on the Ebola outbreak in 2014, when he held the post of chief scientific adviser at the Department for International Development.
Colleagues have described him as "Made for the role of CMO" and "an absolutely extraordinary, brilliant man" and "Exactly the man we need.”
We should all be glad to have someone like this helping the country through a health crisis right now. It doesn't matter what he looks like. Words by Stephanie Wood ."