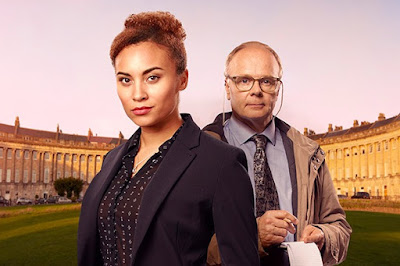 So what have I been watching to move the mood of wretchedness? Came across McDonald & Dodds, just two episodes on ITV, tucked away.  Well an incompatible pair make a delicious foreground to the background of Bath.  Jasper Watkins and Tala Gouveia play the leading roles.  The second series is to start from the 28th February.  It is a detective story, with the poor Dodds played beautifully by Jasper Watkins, he is not quite doddery just bumbling but always manages to work out the clues.  His co-star, Tala Gouveia, sparkles with sharp energy down from London to sleepy old Bath. 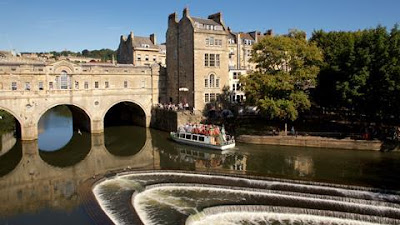 Someone said of Bath it is neither North or South but a little national state of its own, and yes I liked the idea of it being 'middleish'. But I relished the images of Bath, there was even a brief visit to The Bell down Walcot Street, of Tom Stephenson fame.  The only time I ever walked the long length of Walcot Street was either to go to Tridias the toy shop, now gone.  Or, to the musty antique shops, that never made any money at the lower end.  Not forgetting the Saturday market of miscellanea at the top end, I wonder if it still exists or hasn't been bought up by some one to make it either office/apartments/ or elegant shops that sold expensive clothes.

Edit;  Thank you Carruthers for introducing me to London in the 60s
https://www.bbc.co.uk/iplayer/episode/p00rzw31/three-swings-on-a-pendulum
Maybe one day I will write about this but first impressions.  It is like looking down the wrong lens of a telescope, the eyes are blinkered in one direction.  Swinging 60s, Carnaby Street, etc, belong to a few.  The rest of England led a different life, though I recognise a lot of the 'fashionable side', worked and partied in London but never went down Carnaby Street.
Funnily enough I thought more could have been said about class, our society was up to that time riven or marked by the society they came from, perhaps the Beatles broke that down.
Posted by thelma at Saturday, February 20, 2021