Children.  For though she maybe 20 years old Matilda is still a child.  She went back to London yesterday, caught the 6 o clock train, and whilst her mother and I worried about her getting off at Kings Cross and walking to her flat in Camden, the troubles only started later. 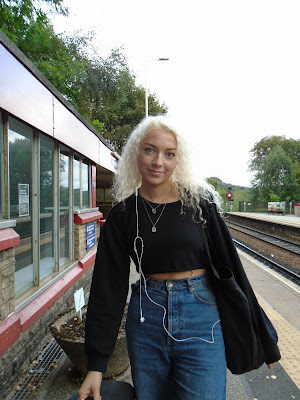 It was a large spider (from hell) in her bedroom, she was inconsolable for a couple of hours and so her mum had to deal with the outcome.  Refusing to get a train down to London though;)  Matilda eventually barricaded herself in her friend's bedroom, who was absent. Spraying round the door with peppermint oil and stuffing a towel at the bottom.

Apparently they do have a spider catcher but it is broken, unfortunately someone threw it at the spider....

Her younger sister, Lillie, scout supremo would not have gone into meltdown of course, having to deal with little cubs on camping trips, tears and vomit just being a couple of the hazards.

You will note the two coloured hair, yes I am blessed with two striking granddaughters, you can pick them out in the crowd a mile away!  We all have fine blow away hair, which curls naturally but is hell to do anything with.

Life will be quieter now the two sisters are separated but it was sad to see Matilda go.