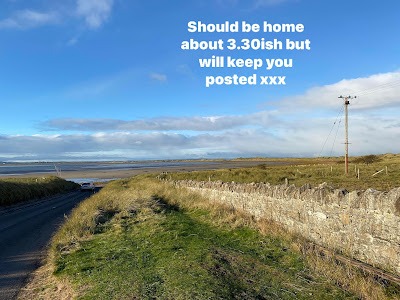 Daughter arrived home safely, think this is a photo of the lane down to Lindisfarne to which they travelled to.  Just a slight tinge of jealousy here, I would have loved to visit the 'Holy Island' and savour the atmosphere.

Snow disappeared overnight, we are now having a warm day before the next batch of cold returns.  One thing you can always depend on is changeable weather in Britain.  Mostly power has been returned round here but not up on 'the tops' or the moor  The stranded visitors in the Tan Hill pub have been rescued.  Probably reluctantly, they had had a good time and have already planned a reunion next year.

Lots of reassuring talk on the radio this morning about the booster vaccinations but it is not necessarily working to order.  We are off to Burnley this morning to try for the booster.  My local appointment was cancelled, due to the loss of power over the weekend is the excuse.  No vaccine there last week or this week, so it is not as easy as the government official (Gillian Keegan) is prattling on about.

I see the Labour party is having a spring clean and changing the furniture around, can it be they sense blood? Are we really so fed up with Tory rule, that those who vote labour will return in their droves.

Should have started with the thought 'living on the edge'.  The radio has become a faulty receptor of our phones, zoom meetings and the jangle of various phone tunes - was it ever like this?  Yesterday alarms boomed in the 'Today' studio and they vacated the building for half an hour.  Do we live in a state of panic, I noticed when the electricity went off alarms started everywhere, and then when it came on they started up again.  Lots of people on the social chitchat did not know how to turn them off!