The goddess Luna. Shown in head and shoulder relief, she is supported by a device which shows both full and crescent moons, and horns, as one symbolic disc.  Her hair is tied up to represent sea-shells, showing her rule over the tides, and she carries a staff and thong, or whip, as an emblem of power and control.  This implement may represent her rule over horses, which would integrate this image with the widespread Celtic goddess of horses, who was one of the major native deities.  Cunliffe suggests that this image would have fitted over the facade of the Four Seasons, which he proposes for reasons of architectual harmony.  Curiously the celts reckoned their seasons by lunar and not solar calculations, so the structural possibility of such a placement of the Luna pediment may have some symbolic background that bridges classical and native use, as it is very plain with the solar pediment that fronted the Temple of Sulis Minerva.   Taken from 'The Waters of the Gap' R.J.Stewart

Stewart does not really have an explanation of this pediment, though he calls her the Lunar Goddess, but the detail could mean anything, and of course everything, this is what religion is all about.  The deep mystical power of the gods, whether they be Celtic or Roman.  At first glance she is Roman, the drapes and hairstyle.  We are supposed to read into the shells in her hair an allegiance to the sea, Oceanus is the god of the oceans.  But if you look at the corresponding Celtic male (photo below) he is also surrounded by symbolic images such as this, "In the corners of the pediment are Tritons, half men and half fish, servants of the water god Neptune. In the lower left centre ground is a face helmet in the form of a dolphin’s head."  And one could argue he  also could be attributed to Oceanus.

Or, and of course this is the most obvious, the symbolic hot springs that is Aqua Sulis.  There is also the fact that Stewart says that the Celtic calendar stems from a lunar reading,  though if we look at the Coligny Calendar it is a Celtic Lunisolar calendar, a far more intricate reading of the seasons. 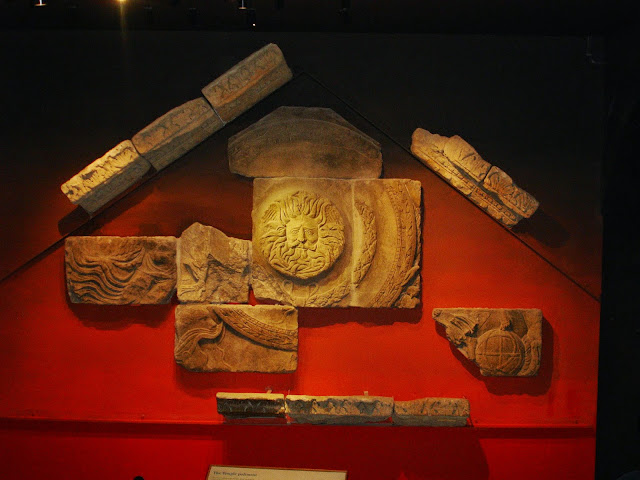 Imagery and symbolism, the rock on which all religions stand, is difficult to come to an understanding of, our first superficial reading blends in with our own patterns of thought, it is more difficult to interpret the thoughts of people born hundreds of years ago.  One thing that can be noted is that the above, thought to be made by a Gaulish sculptor, is a much finer piece of work than the Lunar goddess.

Note; There is still the supposed whip in the hand of our goddess, does she also represent Epona, always depicted on a horse, or even Rhiannon, the Welsh equivalent.  Stewart asks this question for it is the archaeologist Barry Cunliffe, who thought that her figurehead may have been placed over a depiction of the four seasons, and also that what she represents is the pairing of the female with the male, (she may even be Sulis herself) that is often found in the association of these domestic  Celtic gods.