Wade's Causeway
I am fascinated by this stretch of road, I become obsessed by the detail, the folklore, there is a WHOLE chapter on Wade the Giant sometimes thought to come from Scandinavian folklore, he has a wife as well called Bel, and if you write books on history, the etymology of names will take you back to Celtic gods and goddesses and paths that lead you down deep and mysterious ways.  All theorised of course.  The more prosaic medieval story tells of two castles being built by these two, miles apart, and the causeway joined them, one was Mulgrave Castle, not sure of the other.  Wade as memorials in standing stones, there are two, it is a bit like King Arthur, who managed to dance round Wales and Cornwall in all their ancient scheduled monuments, an 18th/19th naming by antiquarians.
But for now I will focus on bleak moors, trashed by the way by Bronze Age settlers, it was originally forested.

The above first photo taken I believe in 1912 is of the revealed 'supposed' Roman road across the Wheeldale Road.  Let it be said at the outset I believe it is Roman, the evidence gathers at a pace when you read the research report of 1964 by R.H.Hayes and J.G. Rutter.  Map photos of the time drawn point to a linkage between Cawthorn Roman Camps and the above road over the moors, travelling on its way through Grosmont on to Lease Rigg, and then presumably to Malton or Derventio which has a whole host of roads, one of course being South to York. 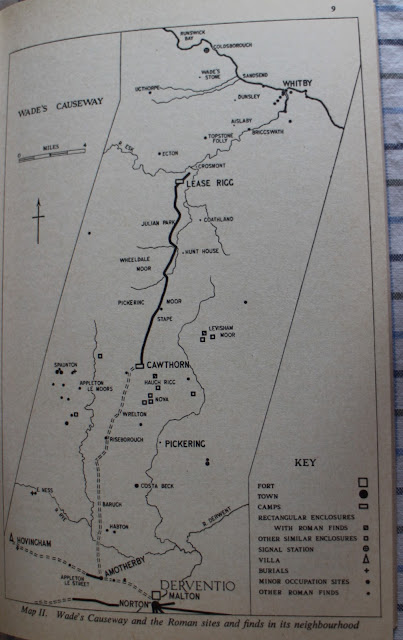 The supposed route onwards towards the East coast is maybe difficult to work out, Sandsend further along the coast has also been put forward, but along this stretch of the coast Roman signal forts have been identified.  Logical therefore that if you are making roads, to take them to the coast for supplies and also back south towards York,  a northern capital, Ebaracoru.  The Romans also had trouble with the Brigantes tribe up here, a show of strength had to be made, a building up of infrastructure as they made their way further north must have happened over the years.

One of the reasons it strikes me as Roman, are how the engineers surveyed the route.  Taking the highest point between two readings, they often followed prehistoric stones, barrows and trackways which also topped the high points.  There are several stones that follow the modern Wheeldale road across the moors further on, now whether these have been moved in more recent times to help the traveller across snow covered roads may be one reason, but the marked Roman road also has Bronze Age cists abutting the road, an indication of 'sighting'.