"There’s nothing clever about stupid high prices for food items, but it’s always good to have something to gawp at. Recently, on a trip round the refurbished Harrods food hall, I spotted Wagyu Kobe fillet A5, imported from Japan, for £62.50 per 100g. Or £625 a kilo. The minimum order is 500g. You do the maths."  Jay Rayner


Food once more;  Kobi beef, cows raised in comfortable byres, only the best food, Saki or beer to imbibe, so that the end results in a very tender fillet steak.  I will not say more, except someone in Wales can do it at a much cheaper rate. And why is he wearing a hard hat, do these poor pampered creatures know their fate? 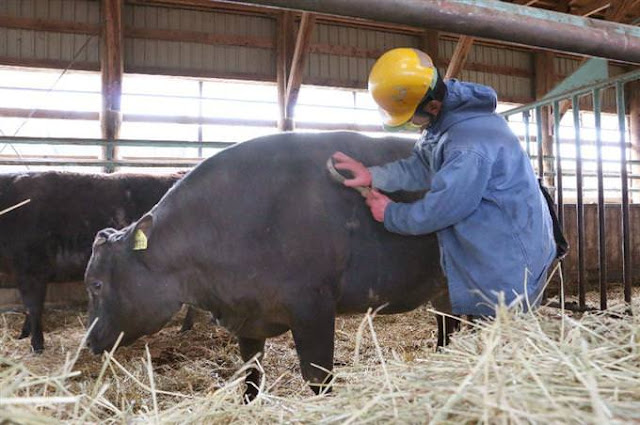 Well what else have I thought about this morning, a certain reluctance to go out in the rain to feed birds/let chickens out started this blog, which by the way got blown away when I had
written it earlier.  I am without a 'mouse' so probably hit a key that is marked 'disappear immediately'.
The other thing which I wanted to record was the fact that we maybe going to a Tibetan monastery in Scotland to take some books for their library this summer. 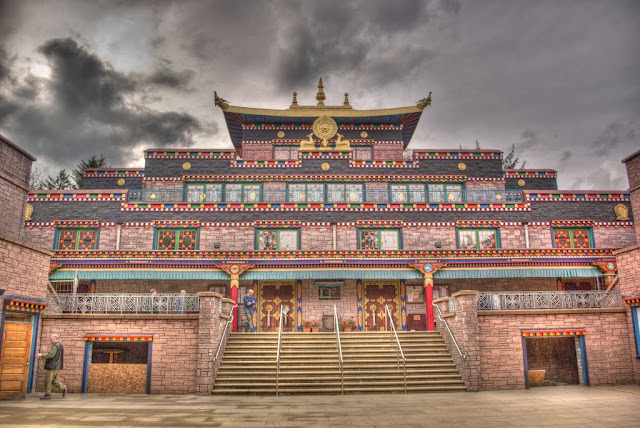 The Kagyu Samye Ling temple is splendid but does not hold a light to a good old grey stoned church but the gardens and enclosed land are interesting.  An environmental concern stands behind this monastic way of life and I find such a temple fascinating in the austere landscape of Scotland, but then isn't Tibet a wild and rugged place?
Tibet is the one place on earth I have always wanted to visit, just to swing those old prayer bells, to stand on those bleak cold plains and drink tsampa tea which is probably quite revolting.
And because my mind is on food this morning, I shall leave a sweet potato in the oven with the bread, apparently, according to Nigella Lawson, you should always keep a roasted s/p in the fridge, mine will go into a soup presumably by roasting it brings the sweetness out.
Consulting Dorothy Hartley on yorkshire pudding; In those olden days the beef was roasted on a spit over an open fire, with the fat dripping down on to the pudding,she gives a slightly different way to preparing it.  Firstly separate the white from the yolk and beat it to a creamy fluffy smoothness you then add the yolks, no mention of milk...

Eggs whipped to snow, with almost as much flour as they will take up well beaten in.  The batter is then thinned down with a little salted water till as thick as good cream. And then presumably you add the yolks.