Blessings to everyone on this nominal first day of Spring

And to the woodpecker whose tapping on the trees greets me every morning, I can also taste the excitement of the coming season.

Let us start with writings that are positive, this from the Paul Waugh Zone

"In his 1947 essay, The English People, George Orwell tried to conceive of a tourist visiting the country for the first time. “Our imaginary foreign observer would certainly be struck by our gentleness: by the orderly behaviour of English crowds, the lack of pushing and quarrelling, the willingness to form queues,” he wrote.

Well, this is what I have seen either when I had my jab, or television programmes, we do things with good grace and chatter those inanities we are so good at.  I expect it can be different in some parts of the country, but we have mostly gone out and sat and stood obediently whilst good people in yellow jackets tell us what to do. And it seems to be paying results. Also I did not know that the Oxford AstraZeneca vaccine was a non-profit endeavour either. Rock on science!

One of my resolutions or actions for the future has to be to listen to British Classical books read out to me, the reason I joined Audible books, though I notice you only get one credit a month, but slowly stack your library.  Thomas Hardy (The Return of the Native) is on the wish list as is The Woodlanders, also George Elliott's Mill on the Floss.  George Orwell will be there as well.

On a more mundane level, my cardboard boxes arrived yesterday, and once I had mastered the art of making a square box, secure at the bottom, I started to fill two.  My books are plastic bagged, one of the no-no of getting one's shopping delivered from Morrison's is an excess of plastic bags but for the moment I am not grumbling.  The books are easier to throw away, shock and horror I can see on many faces but I do not read much fiction, all my books have followed my interests through life.  I bet I can even reduce my cookery books to two.

Watching television last night,  the programme Pilgrimage to Istanbul was fascinating, a hodge podge of people, such as Edwina Curry, Adrian Chiles and Fatima Whitbread, plus others whose names I cannot spell.  Mim is a beautiful person. 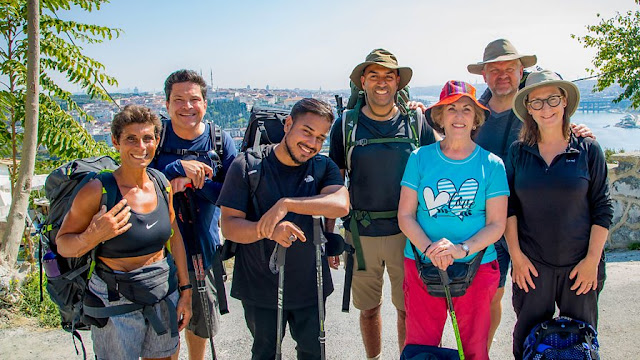 Such a disparate group of people and beliefs but exploring their ideas on the road.  The scenery was magnificent and I am sure they take a car sometimes but a courageous long journey and some stunning architecture and friendly people.  As far as pilgrimage in this country goes, we seem only to have Walsingham and Canterbury routes.

And a taste of camping to keep you amused.