My small ramblings seem to pull in a large audience - scary ;) Today is the day of lesser news though.  Major Biden has been sent home in disgrace for biting a security guard.  In fact both Biden's dogs have been sent home, they did not like the White House and all its formality of people and lifts. 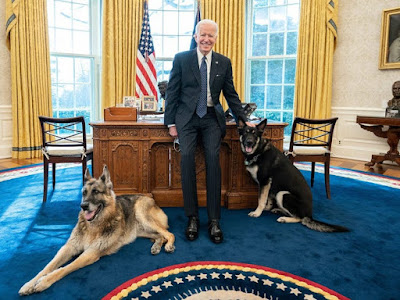 Piers Morgan has also been sent off home for ranting a tad too much over the latest royal happening, I think his 'bestie' is Rupert Murdoch so no worry of a job there then and apparently he has a healthy bank balance.

As does Prince Harry by the way, he forgot to mention that his mother left him a tidy sum, easily enough to take him over this present hump of poverty he claims against.

All I will say on this  is think of the children as they grow up, H&M (wasn't there a shop called that?) are not creating a good future for their children, they will grow up and learn to read for goodness sake the muddles their parents have created.

The Queen's strong and patient hand has come down on the whole affair luckily.  Though not a royalist, I do think several states of authority is much the better way of looking after the country.

Yesterday I did not watch 'The Interview' but instead Panorama on Racism, it is something I have never taken much notice of. Except of course to applaud the way more and more Black and Asian faces appear in the media.  For me people are just people but putting oneself in the body of a black person and walking through the snubs of the day by white people and it is hell.  The words 'White Privilege' is one that struck home.

I cannot understand why some  people cannot accept people of other races, wasn't there a song about 'coffee coloured people' and aren't those children of mixed parentage beautiful?  I see them on television, as roving journalists, actresses and commentators on the ills of society.  We are an evolving nation.

I am waiting for a call from my doctor on the blood test.  Nervous of course, not about the results but whether I will be able to answer the wretched smart phone I now own... phew

But as an aside saw this video of the Pope and loved the simplicity of his philosophy, for 'pray' substitute 'empathy' and smile as this little girl dances round on the stage as he makes a speech.