The following is a repeat of a blog I wrote in 2008, though I have taken the news item out, news always moves on.  I think the hare was painted by Jane Tomlinson and an Easter card.  I have two hare prints on the wall, the original paintings by Colin Blanchard but have always wanted the one, now out of print, of harebells and hare.  Could find the Durer painting, but I have written so much about hares that it would take me ages to find the blog.  The other saint story I love is about the cuckoo flying in at Easter and then dying exhausted on the saint's day of another Welsh church. 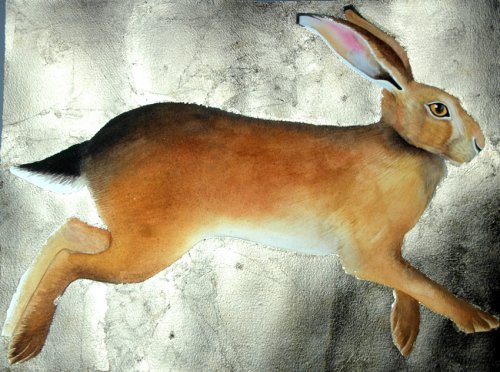 Hares are one of my favourite creatures, sometimes I see them out when walking, once Moss gave chase up on the racecourse, they both did the mile in record time, the hare winning of course.

But the card also brought to mind the lovely story of Saint Melangell and her little hare. She was the daughter of King Cufwlch and Ethni of Ireland and she fled to Wales to escape a forced marriage. She settled in Pennant at the head of a valley, and whilst one day sitting in a clearing she heard the sound of a hunt, dogs and horses galloping up the valley. This was Prince Brochwael of Powys hunting hares. As she sat a hare came into the clearing and Melangell hid it in the sleeve of her dress to protect it. When it peeped out the dogs fled, and so the Prince gave her the land on which he hunted, and she lived at Pennant for another 37 years and no animal was killed in her sanctuary. Hares were known as wyn bach Melangell or Melangell's little lambs, and to kill a hare was an act of sacrilege.
https://en.wikipedia.org/wiki/St_Melangell%27s_Church,_Pennant_Melangell
This story is taken from "The Book of Welsh Saints" T.D. Breverton, and there are other versions of the tale. But at Llanfihangel-y-Pennant near Llangynog is probably the site of her foundation, because on the church's medieval rood-screen are little hares.
Of course it must not be forgotten that the term Easter comes from the Anglo-Saxon Goddess Eostre as Bede states here;
The English Months. In olden time the English people – for it did not seem fitting to me that I should speak of other nations' observance of the year and yet be silent about my own nation's – calculated their months according to the course of the moon. Hence after the manner of the Hebrews and the Greeks, [the months] take their name from the moon, for the moon is called mona and the month monath. The first month, which the Latins call January, is Giuli; February is called Sol-monath; March Hreth-monath; April, Eostur-monath; May Thrimilchi... Eostur-monath has a name which is now translated Paschal month, and which was once called after a goddess of theirs named Eostre, in whose honour feasts were celebrated in that month. (Eostur-monath, qui nunc paschalis mensis interpretatur, quondam a dea illorum quae Eostre vocabatur et cui in illo festa celebrabant nomen habuit.) Now they designate that Paschal season by her name, calling the joys of the new rite by the time-
honoured name of the old observance.
So much of christianity's myths lay on the back of old gods and stories, and Easter is a prime example, this spring festival has as much to do with the dawn rising earlier each day heralding the new growing season than it has to do with Christ being hung on a cross for our sins. A story created and used for so many centuries by the priests to bring people to their own particular version of religion.
Posted by thelma at Tuesday, March 02, 2021