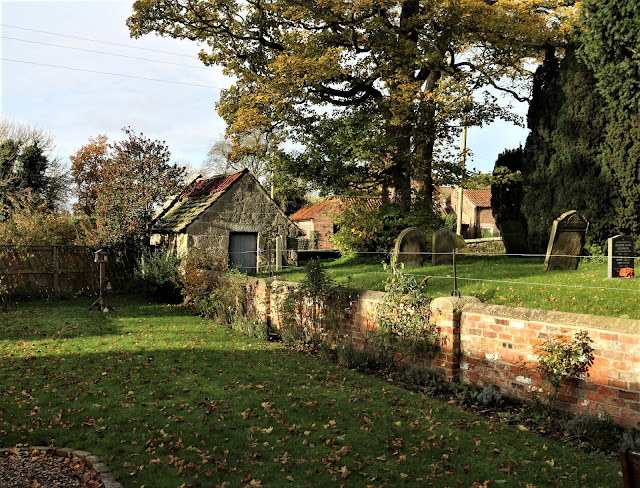 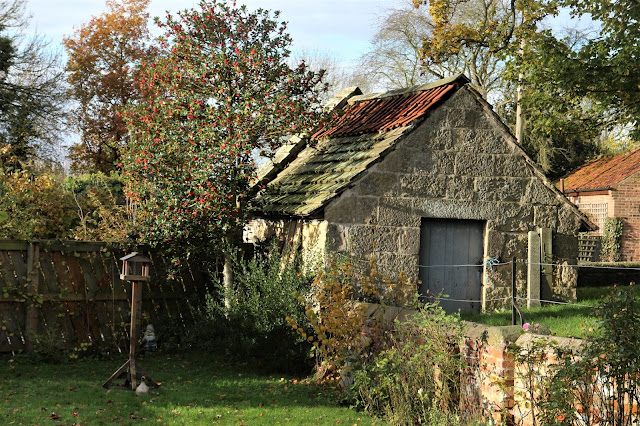 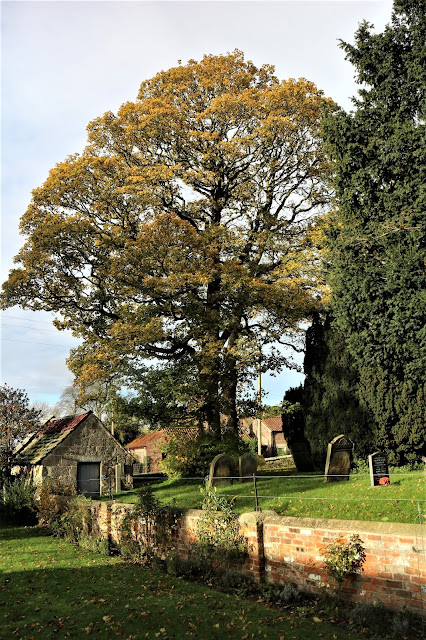 Berries and trees:  There is a serenity in the garden, golden with sun and leaves, a tranquility  of age sits lightly on the air next to the church.  The holly tree, has an abundance of berries, and blends beautifully with the old Coke House of the church.
In days gone by the coke would have been used on two stoves within in the church.  It would have been filled from the front hatch by a horse and cart man.  This little building has a previous history though.  It is a Grade 11 listed building, basically because it was a Watch House.  A sort of police station, where you threw the miscreants before they were carted off to the courts in the bigger towns.  Here in this village, it would probably have been for drunkenness, for the road through the village was a drover route, and many cottages sold ale.
Probably the land on which this house was built would have temporarily housed the beasts on their way to market.
Monday I took a friend to Malton hospital, and whilst she was there, I wandered round the shops.  The oomph has gone out of many high streets, they are unloved by the public and slowly sink into emptiness.  The Museum was shut, only opens Thursday and Saturday, and I decided Malton  was not for me.
Yesterday a friend visited, they have a house in Whitby, but came back because the weather there was so bad.  We discussed the shops around and I found out that apart from the Co-op having a strong monopoly up North, there is a 'Waitrose' type supermarket called Booths further up north.
My daughter has just messaged she has started a new job as a manager in a charity shop in Manchester.  Tired and exhausted but I think happy, Matilda is refusing to help in the house though.
Today is a boring garden club meeting,  Why do we need lawns, well all I can say is that ours is filling up with leaves, and we are being told by nature lovers to leave them there - brilliant.
Posted by thelma at Wednesday, November 13, 2019